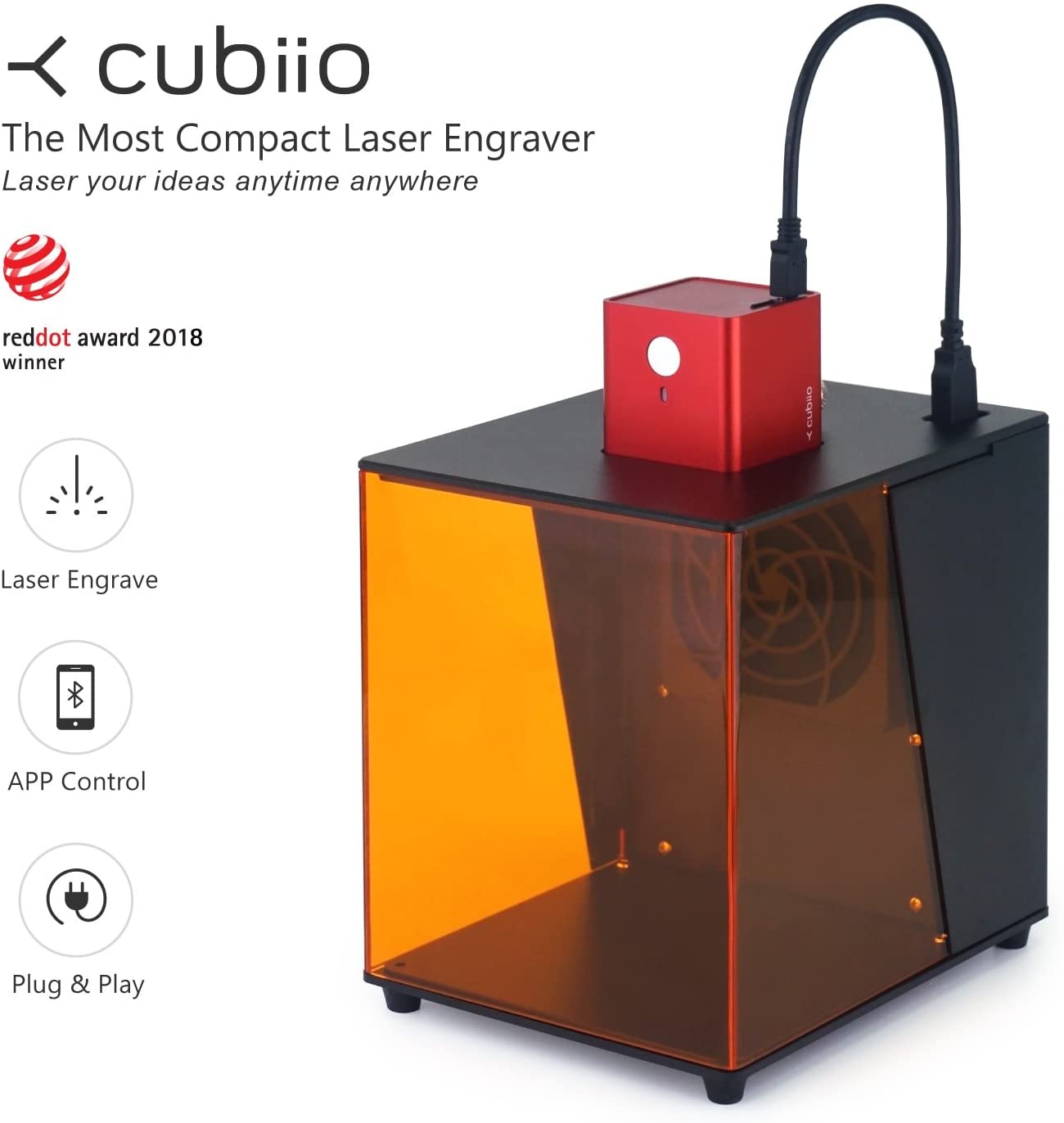 The Cubiio is a compact laser engraving device. The device itself is approximately a three-inch cube. It uses a relatively low-power blue laser to engrave.

The main attraction for these little lasers is that they are so very compact and insanely portable. The big drawback, however, is the other side of that same coin. Its portability is advertised to give users the power to turn any room in their house into an engraving studio.

We’ll get to the “drawbacks” for the Cubiio but, for now, let’s focus on the positives. What does $699.00 on Amazon really get you? Well, as I stated in the product description, the Cubiio is an incredibly small laser engraving device that nearly fits in your pocket.

It’s so ‘compact’ that it seems unbelievable that it could even get hot enough to cut through most materials. With its small 1,600mW blue laser diode and a working area of 100 x 100mm, the Cubiio really lives up to its reputation.

However, after a few different tests, we can confirm that the Cubiio can, in fact, engrave on almost any surface. It will cut both raster and vector images on things like wood, plastic, and metal and will cut paper and cardstock. It’s easy to set up and use. Once you download the Cubiio app and agree to all the terms of service, the device sinks directly to your phone.

While the device is in operation, it emits a cheerful beep to remind you that it is running and has a motion-sensitive killswitch in case it gets bumped. Another charming aspect of the Cubiio portable laser engraver is that the user must input a passcode before turning it on, guaranteeing that the laser will not turn on accidentally. The Cubiio also ships with an engraving case with a built-in extractor fan that shields the eyes from the laser.

From the app, you can access images from your cloud storage and convert them instantly into raster engravings. The comparatively small laser in the Cubiio can still create bold raster images with thick, well-defined impressions. It will even take photos from your phone and transform them into lasting engravings.

How to Easily Choose the Right Body Piercing Wholesale Supplier

If you intend to engrave on a small surface and on a small scale, this could be the engraver for you. Its portability means that you can take it with you wherever you go, making this an ideal product for someone who is setting up at a convention of some kind to sell personalized engravings. But, if you’re planning to anything larger, you may want to look elsewhere.

Now, we’ve already covered the capabilities of the Cubiio and the benefits of purchasing one. This section is dedicated to the aspects of the device that are not-so-great. First on the list is the size.

Right on the box, Cubiio says that it’s, “The Most Compact Laser Engraver.” This is quite possibly true, and, while the laser does function as intended, size does matter. At least in this case.

The 1,600mW diode simply does not cut as deeply as you might like as quickly as you might like. Due to the lack of raw power, the Cubiio does not work very quickly. When engraving a raster image, you should anticipate waiting for at least half an hour to forty-five minutes. And, because the unit is so small that the scale of what you’re capable of producing is vastly reduced.

On the Exchange Marketplace - Drop Shipping Home Business for Sale

This reduction in size leads to a fairly common problem in the world of creating images. Generally speaking, the smaller you make something, the less defined the image will be. This trend holds true with the Cubiio.

This machine would also be great for the stay at home mom to engrave small trinkets or vector images such as a vector mandalas, which can be downloaded for free for free and  uses with the cubiio

When converting a photo with a nuanced variance in shading, you can expect to lose much of the detail in the transfer. This device performs perfectly when engraving simple lines or vector images. However, when put to the task of inscribing a circle, it loses much of its accuracy. The company is aware of this problem and are trying to fix the problem.

For now, circles seem beyond the Cubiio.

As mentioned in the product description, the Cubiio ships with an engraving case. This case is not very large, either. The lack of size in the case makes it incredibly difficult, if not dangerous, to attempt engraving on a larger object that will not fit in the case. You will have to disable multiple safety standards on the device in order to do this and remove the bottom from the case. Doing this exposes the user to many hazards that could be otherwise avoided with a bigger machine.

Another big problem with the Cubiio comes less in its manufacture and more in its advertisement. The device is advertised to be incredibly quick in engraving. We’ve already covered that it isn’t. It’s also consistently displayed as being an engraving tool on-the-go that one can set up on a tripod like a projector. While this is potentially possible, it is wildly unsafe. Engraving on a surface that may contain unknown and potentially harmful chemicals, out in the open, is simply not a wise decision. And, even though you will find a pair of protective glasses in the box, it is never a good idea to engrave with an open laser in a room where anyone could just walk in and be in the danger zone.

The Cubiio’s laser diode may not be incredibly powerful by comparison to other larger models; however, its beam still has the potential to blind someone.With this potential hazard in mind and that of the possible inhalation of harmful particulates, it is recommended that you use the Cubiio in conjunction with its protective case. The panels that comprise the walls of the case filter out a safe level of the radiation. While you should still wear your protective glasses, this first-stage filter will maintain the safety of anyone who may stroll into your workshop unaware. The extractor fan in the case will also prevent any build-up of harmful particulates or gases from forming on the engraving surface.

The Ultimate Guide to eCommerce Advertising: The Crucial Mediums and Platforms You Should Know

All-in-all, the Cubiio is a compact laser engraver that gets the job done for small projects. It is a good buy for someone who requires mobility out of their workstation and could be an excellent gift for someone looking to start a new hobby. Having the ability to work with both Raster and SVG images it is for the home hobbyist or someone who just wants to engrave on a larger surface, the Cubiio is not the machine for you.

Benefits of Ebook for Brands and Businesses

The Ultimate Guide to eCommerce Advertising: The Crucial Mediums and Platforms You Should Know